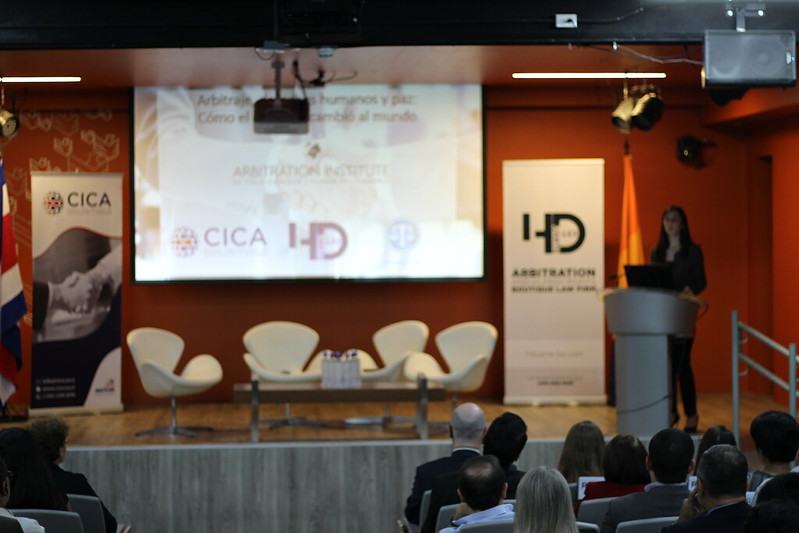 On March 13, 2018, Young ITA Co-Sponsored an event entitled “Arbitration, Human Rights and Peace: How Arbitration Changed the World” in San José, Costa Rica.  This conference was co-organized with the Arbitration Institute of the Stockholm Chamber of Commerce (SCC), the International Center for Conciliation and Arbitration - AMCHAM Costa Rica (CICA), and HDUARTE-LEX.

Alice Shackelford, United Nations Coordinator for Costa Rica, gave the opening remarks.  She emphasized the importance of peaceful spaces for dialogue and conflict resolution in order to uphold human rights and to achieve sustainable development.

After the opening remarks, the event opened with a screening of the documentary “The Quiet Triumph: How Arbitration Changed the World,” which provided a new perspective (through film) of how international arbitration has played an important role in enabling constructive relationships among states in international trade and economic development.  The film premiered in Stockholm at the Stockholm Chamber of Commerce’s Centennial celebrations on January 19, 2017.

This was followed by a Q&A session with Dr. Annette Magnusson (Secretary General of the Arbitration Institute of the Stockholm Chamber of Commerce) and Herman Duarte (principal at HDUARTE -LEX).  Their conversation explored the role of arbitration in a social context, and invited the audience to reflect on the positive impact that alternative dispute resolution has had on the world.  This generated an active discussion with the audience, which reflected the growing interest in arbitration in Costa Rica.

Next, there was a roundtable with Dr. Magnusson, Adriana González (head of the Dispute Resolution Team at the Costa Rican Ministry of Foreign Trade) and Edward Pérez (legal counsel at the Inter-American Court of Human Rights).  The roundtable, which Karima Sauma (Executive Director of CICA, Young ITA Chair for Mexico and Central America) moderated, addressed the relationship between human rights and arbitration.  Dr. Magnusson first explained that even though the relationship between commercial arbitration and human rights is usually not obvious, both areas are gradually becoming more connected.  She then turned to investment arbitration, and gave specific examples of investment treaties that include clauses related to the protection of certain rights that fall within the sphere of protection of human rights.

Adriana González then discussed the specific links between arbitration and human rights.  When referring to the merits of an investment arbitration case, she highlighted instances of expropriation and the deprivation of property rights as clear examples, and pointed out how certain arbitral tribunals have considered decisions of human rights courts in their own awards.  Regarding procedural matters, she emphasized how certain legal norms and figures in arbitration have advanced due process rights.  As an example, she commented on aspects related to the transparency of the process, such as the obligation to publish all key case documents, provide access to hearings, and allow amicus curiae submissions.

Edward Pérez next provided commentary on which bilateral investment treaties allow for international human rights law to be incorporated as applicable law.  He also described instances in which judgments of international courts or international arbitral awards dealing with human rights might also be considered part of the “applicable law” in an investment arbitration.  Finally, Mr. Pérez talked about the concept of “conventionality control”, a theory developed by the Inter-American Court of Human Rights that demands that inter-American and domestic judges examine the compatibility of national legislation and practice with the American Convention on Human Rights as interpreted by the Inter-American Court. He then explored the concept’s potential impact on international investment law.

Dr. Todd Weiler closed the conference with a keynote speech on the shared roots of International Investment Law and International Human Rights Law.  He argued that the sharp divide between these two areas of legal practice should not exist.  He regards these areas “as public international law siblings” because they both share the same doctrinal basis and the same historical roots.  As an example, he mentioned that both areas address the relationship between the sovereign state and the individual, and that both remind us that the sovereignty of the state is not boundless, which is why it must be exercised in a manner consistent with the general international law principle of good faith and with specific legal norms. He added that we tend characterize these rules as either “international investment law” or “international human rights law,” but, doctrinally speaking, they are founded on the same premises.

Dr. Weiler also examined the historical links between International Investment Law and International Human Rights Law in documents such as the 1902 Treaty of Friendship and General Relations between Spain and the U.S. and the 1951 Friendship, Commerce & Navigation Treaty between Israel and the U.S.  After a detailed historical analysis, he concluded with proposals on how international investment arbitration specialists can make use of international human rights law in their practice.  He suggested that, for example, an investor’s non-compliance with human rights obligations could affect the relative success of his or her claims. This non-compliance could also affect the case’s admissibility, among other issues that could arise.

Valeria Garro is a Juris Doctor candidate at Universidad de Costa Rica, in San José, Costa Rica. She is certified in mediation and negotiation from the International Center for Conciliation and Arbitration of the American Chamber of Commerce in Costa Rica. She has worked as a paralegal in arbitral and judicial litigation for the past four years and is a member of the Board of Directors at Costa Rican Young Arbitrators (CYA).

Karima Sauma is the Executive Director of the International Center for Conciliation and Arbitration of the American Chamber of Commerce in San José, Costa Rica (AmCham Costa Rica), and teaches international arbitration at ULACIT University in San José. She has worked as an Advisor in the Dispute Settlement Department of the Costa Rican Ministry of Foreign Trade, where she worked as part of Costa Rica’s defense team, and was part of the negotiating team for investment treaties. Prior to joining the Ministry of Foreign Trade, she worked at Freshfields Bruckhaus Deringer in Washington, DC. Karima is Young ITA’s Regional Chair for Mexico and Central America.